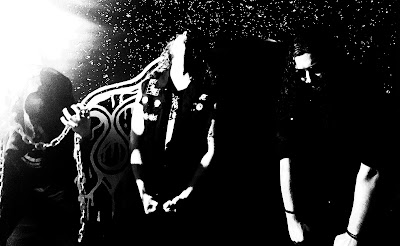 We are now taking orders for Aggramica (VT-IX), the second demo from Vrasubatlat horde, Dagger Lust. To purchase, click here. Further, expect Triumvir Foul and Vrasubatlat patches to be available on the webstore later this week. There are also a few Dagger Lust and Triumvir Foul shirts left as well as copies of the Uškumgallu (VT-I) and Serum Dreg (VT-II) reissues.

Upcoming releases:
The debut LP of Uškumgallu, Rotten Limbs in Dreams of Blood should be released within the next few months on both vinyl and cassette formats. Also expect a reissue of Uškumgallu's second laceration, Mortifying the Flesh (VT-IV) to coincide with the aforementioned release.

Additionally, work on Triumvir Foul's sophomore LP continues and will hopefully be out early next year, along with a reissue of the eponymous debut.

Lastly, Urzeit, although not a Vrasubatlat project (but closely related to its members), will be self-releasing their debut LP Anmoksha. The album is currently off at press and should be released within the next few months.
Newer Post Older Post Home
Vrasubatlat