BESIEGED TO DOMINION
Vrasubatlat is proud to announce that it will be partnering with Goatowarex on several releases - none of which have received vinyl treatment until now. Historically, Vrasubatlat has maintained much independence besides working with a few other labels, including Invictus Productions, but now with Goatowarex's similar vision and aesthetic, they have also entered the fold. The first manifestations of this partnership are as follows (release dates TBA):

WAXGOAT205/VT-XXII - Pissblood - Pissblood LP
The eponymous debut LP of Pissblood pushes the band beyond its previously exclusive noisy D-beat sound and into a realm of various punk influences. Ranging from Japanese D-beat to some American hardcore sounds, Pissblood showcases a brutal new approach with this reformed lineup. Scorch the earth, fall into the dirt, and writhe in piss.

WAXGOAT194/VT-XXIII - Utzalu - Idiot Hell LP
The sophomore full-length release from Vrasubatlat entity Utzalu marks a departure from extrinsic hatred to the depths of selfish psychosis. Returning to the much more punk-based roots of the project, Idiot Hell showcases the primal destruction in one of the more simplistic conduits of the roster. Idiot Hell is a decrepit pathway for the indulgent, the weak, and most of all... the starving. Punish your existence and collapse between the caving walls.

WAXGOAT195/VT-VII & VT-IX - Dagger Lust - Dagger Lust/Aggramica LP
This release marks the first time ever both the eponymous Dagger Lust demo and Aggramica demo are to be released on vinyl for this compilation. These two demos together have been remastered to showcase the dynamic range of Dagger Lust's minimalist approach. This release features all-new artwork carrying the spirit of the earlier releases and embodies their inspirations from sadomasochism, hatred, and filth.

WAXGOAT204/VT-I & VT-IV Uškumgallu - Uškumgallu/Mortifying the Flesh LP
Both long out-of-print demos from the first Vrasubatlat entity Uškumgallu will also now be available for the first time since their second pressings in 2016. Both the eponymous demo as well as Mortifying the Flesh show the abyssal trajectory of Uškumgallu into the madness that led to their first full-length, Rotten Limbs in Dreams of Blood. This release also contains new artwork embodying the stygian descent into schizophrenia heard on these early demonstrations - both true testaments to anxiety, depravity, and desperation.

Vrasubatlat and Goatowarex plan on continuing to work together and will likely be releasing Adzalaan's sophomore album in 2020. More news to be revealed in due time. 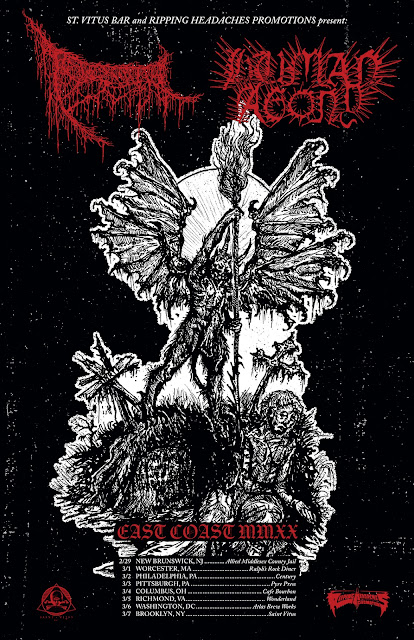 Triumvir Foul will be descending upon the east coast in March 2020 with northern horde Human Agony. Dates are as follows: